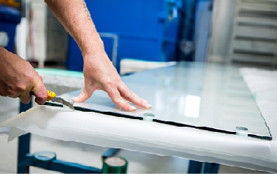 During laminating, we produce double or triple layer glass structures by putting EVA or PVB foil between the glasses. Its color can be clear, matte or colored.

Free edge resistence: EVA is much more resistant against humidity, prevents delamination at uncovered edges. In case of using PVB, few centimetre faults can appear at the edges.

Personal and goods protection: EVA and PVB respond equally to ball dropping test, they both have the manufacturer’s product qualification for the same foil distribution.

Decreasing of layers: because of its fluidity, less EVA foil is needed compared to PVB foil in case of tempered laminated glasses.

Cutting and other processings following it such as grinding, drilling, tempering, painting come before laminating.

Laminated glass can be produced from tempered/toughened, but also from non-tempered glass-layers, the choice depends on where the glass will be installed and also on previous processings.

The glass-structure becomes safety glass after laminating, because if the glass breaks, the broken glass will be held together by the foil, so the structure can stay together.